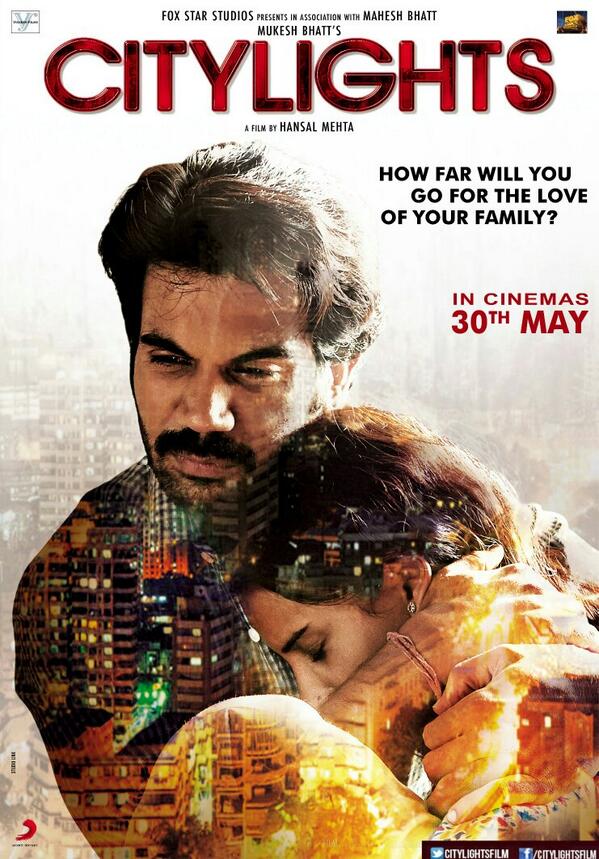 Citylights : Falls short from being a classic

Citylights re-unites the director actor duo Hansal Mehta & Rajkumar Rao after a superb “Shahid” which won each of them the National Award this year.

Citylights is an adaptation of 2013 Award winning movie “METRO MANILA” directed by Sean Elllis and Hansal Mehta does complete justice to the original. The story is credited to Sean Ellis the original writer of METRO MANILA; the adapted screenplay is by Ritesh Shah. Ritesh stays true to the original but adapts it to the Indian context of people from smaller towns who migrate to the city of dreams Mumbai expecting to make a better living. Just a piece of advice if you are looking at an entertaining movie then this is definitely not the right choice.

Citylights is the story of Deepak (Rajkumar Rao) and Rakhee (Patralekha) who come to Mumbai from Rajasthan to make a better living but become victim of the shrewd reality of city life. The story by Sean Ellis captures the pathos of a small town guy well in his story and Ritesh’s screenplay captures the nuances well. At times the movie’s pace becomes sluggish especially during song sequences which was unnecessary. Some of the sequences are very well written albeit I felt the climax was a bit hurried and could have been presented well.

It is the performances which make the movie memorable. Rajkumar Rao gives another brilliant performance. His portrayal of Deepak Singh is so realistic that you wonder whether he is really acting. The Dialect to the body language is all up to the mark. Another superb performance is of Manav Kaul who plays Vishnu a friend of Deepak with ulterior motives. After “Kai Po Che” Manav again shows his caliber, this is an actor to look forward to. Sadia Siddique as Vishnu’s wife is good albeit her role is small. Patralekha as Rakhee does show a spark but gets overshadowed by Rajkumar and Manav.

Production Design by Rajat Poddar is realistic. Editing by Apoorva Asrani could have been sharp. Jeet Ganguli’s music is good but does not gel with the narration rather it hampers the pace.

Hansal Mehta’s forte is to get the human emotions bang on and he succeeds in this movie as well but fails a bit in giving it a Thriller edge and finesse in the narration which was the highlight in the original METRO MANILA. I will go with THREE AND A HALF STARS…