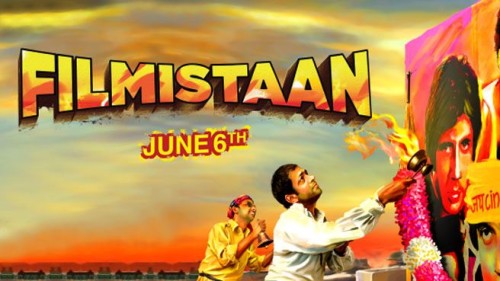 Filmistaan: Worth a watch for all movie buffs….

Nitin Kakkar’s “Filmistaan” at last had a commercial release after 2 years doing the rounds of Film Festivals and winning various awards since 2012, the most renowned award being the National Award for best feature film in Hindi in 2012

“Filmistaan” is a heartwarming story of how films bind two warring nations India & Pakistan. It is a simple story of a wannabe actor and movie buff Sunny Arora (Sharib Hashmi) who is struggling to become an actor and who gets an opportunity to work as an Assistant Director with an American Crew for a documentary in Rajasthan. During the Rajasthan outdoor shoot Sunny gets kidnapped by the terrorists by mistake and is taken to Pakistan and held captive in a small village near the border. In this village he befriends Aftaab (Inaamulhaq) another movie buff who has a business of selling pirated CD’s of Bollywood movies. How their friendship becomes stronger and what partition is meant for a common person is explored in the rest of the movie beautifully.

The Story and Screenplay written by Nitin Kakkar himself is the strongest point in this movie. It has some funny as well as heartwarming moments which explore the sentiments of the people of both the nations well. Some of the sequences like when the whole village watching “Maine Pyar Kiya” in zapped attention, or how the kids get entertained by Sunny mimicking various actors, or when the video of Sunny is being shot as a captive is hilarious. All the sequences between the two friends Sunny and Aftab are written and executed beautifully. All the characters are written with a lot of depth. It is the climax which I think could have been written much better, it looks hurried and as if the director wanted to finish the film anyhow.

The dialogues written by Sharib Hashmi blends beautifully, this is again hilarious as well as emotional. It lifts the screenplay, like the dialogue when Sunny states to Aftab about a situation if the nation was one then the cricket team would be the stongest with Sachin, Dhoni, Afridi & Shoaib in one team. All in all the writing of the movie is the strongest point.

The second strong point of the movie is its performances. Sharib Hashmi as Sunny Arora is brilliantly portrayed and to compliment Inaamulhaq as Aftab again a brilliant portrayal creates the on screen bond stronger. Kumud Mishra as terrorist Mehmood creates the conflict well and his portrayal of a silent and yet aggressive character is just too good, I hope he gets more opportunities in the near future. Another brilliant performance is of Gopal Dutt playing Jawwad, the complexity of the character is well brought out by Gopal. The rest of the ensemble cast also does a brilliant job, taking the otherwise simple movie into a different level.

Cinematography by Subhranshu Das captures the rawness of the desert well and blends with the narration well. Editing by Sachindra Vats plays a key role in making the movie a worth watch.

Nitin Kakkar does a commendable job without being preachy as to how both nations India and Pakistan have so much in common and especially the Bollywood connect. For a movie buff like me it was delight to watch “Filmistaan”, I will go with 4 Stars…