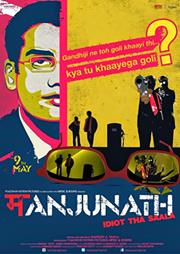 Manjunath: A Real Life Saga which fails to inspire on celluloid

It is not easy to adapt a real life incident and make it into a full blown 2 hour saga on celluloid.

Director & Writer Sandeep Varma’s motive to make “Manjunath” was to bring the story of unsung hero Manjunath Shanmugham ,a 27 year old IIM, Lucknow pass out who was killed by Oil mafia in UP as he was exposing the racket of oil adulteration in 2005. Sandeep’s intentions are novel but fails badly due to a non cohesive screenplay and shoddy narration.

The screenplay oscillates from Manjunath’s life in IIM to his personal life to his professional life when he joins an oil company and his parent’s struggle to seek justice.

Overall the screenplay becomes a mish mash and does not delve on any one aspect.
Sandeep could have made this movie inspirational and crisp by concentrating on his professional life and his fight with the Oil mafia and the uproar after Manjunath is killed.

But the movie does touch you emotionally due to its performances. The debutant actor Sasho Satish Sarathy does an incredible job of portraying Manjunath, his struggle his frustration is aptly portrayed. Seema Biswas as Manjunath’s mother is another highlight performance of the movie. Divya Dutta in a brief role creates an impact. The other cast like Anjorie Alagh, Rajesh Khattar, Yashpal Sharma, Faisal Rashid do a splendid job taking the movie a notch higher.

Sandeep Varma had everything going a splendid cast, an inspiring story and back up of Viacom 18, but alas he fails to put a cohesive screenplay making it less inspirational. I will go with 3 stars solely for the performances and its inspiring real life story.