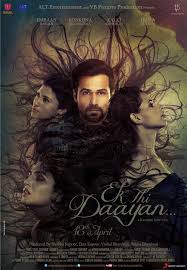 Diana (Konkona) who he suspects to be the WITCH.He is supported by his girlfriend Tamra (Huma Qureshi), but things take anunusual turn when a girl named Lisa Dutt (Kalki Koechlin) enters their life.The rest of the story uncovers the mystery of the WITCH in Bobo’s life.

The story & screenplay by Vishal Bharadwaj & Mukul Sharma starts well and keeps you at the edge of the seat in the first half,second half the screenplay starts losing its fizz and the climax completelygoes into a typical masala horror movie mould. What starts as a promisingconcept somehow ends at a low note, but overall it does not disappoint.

The ensemble cast does a brilliant job, starting with EmraanHashmi as “Bobo the Baffler” who under plays his character and does justice tohis role, Huma Qureshi as Tamra is natural, Kalki though she does well but hasnothing much to do, but it is Konkana Sen Sharma who steals the show with her brilliantportrayal of Diana, her body language her expressions give you the chill andnot to forget the child actor Vishesh Tiwari who play the kid Bobo is just tooimpressive. Rest of the cast like Pawan Malhotra , Rajatava Dutta areimpressive.

The camera work by Saurabh Goswami gives the right ambience,Editor Sreekar Prasad keeps the pace with his tout editing. Background score byClinton Cerejo is impactful adding the spooky quotient to each scene. Music by Vishal Bharadwaj & lyrics by Gulzar is the high point especially the song“Yaram” sung by Sunidhi Chauhan & Clinton Cerejo is brilliant.

Kanan Iyer ends the movie with a lot of questionsunanswered, do we see a Part II happening???…Kanan Iyer does impress andshows promise…I will go for 3 stars (One for Konkana Sen Sharma)