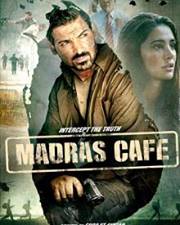 Madras Café on the onset is a Political Thriller which does complete justice to the genre. There are very few films in Bollywood which is of this genre and ‘Madras Café ‘will be remembered as one of the cult movies in this genre.

and Tamils was at its peak and Vikram Singh (John Abraham) is sent to Jafna to start peace talks between LTF chief Anna (Ajay Ratnam) and Sri Lankan Govt. The peace mission goes horribly wrong, and the mission is aborted resulting in a conspiracy to kill the Ex PM by LTF. The story captures how the conspiracy is hatched and the outcome thereafter.

The editor Chandrashekhar Prajapati has done a splendid job in keeping the pace on the edge. Cinematography by Kamaljeet Negi is brilliant setting the mood of the movie well. The war sequences are shot well by Manoher Verma.
Shoojit Sircar has again proved his versatility with ‘Madras Café’. It was a difficult movie to be made without being preachy and not taking sides and Shoojit has done a brilliant job at that. His command on the medium is amply clear with this movie.

Performance wise John Abraham shines in this movie (after Force), he is convincing and suits the role to the T. Nargis Fakhri who plays a war journalist ‘Jaya’ has a brief role but she does well (maybe because she had all English dialogues). But one actor who shines is Prakash Belawadi who plays ‘Bala’, he actually outshines the rest of the cast with his portrayal. Rest of the support cast like Sidharth Basu, Piyush Pandey etc .also does well.

Overall an entertaining political thriller, I will go with 4 stars…