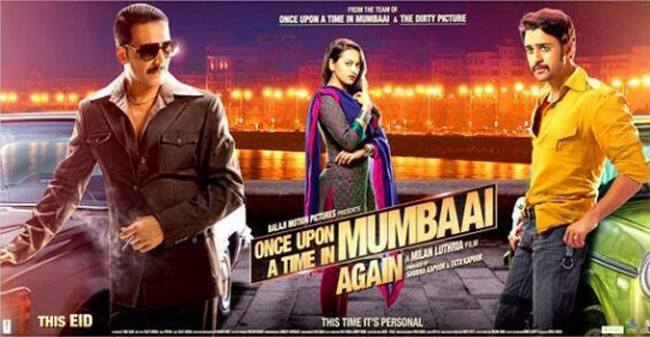 Once Upon A Time in Mumbai Dobara: Not as impactful as the first part

The first part was an out and out gangster flick wherein it showed Mumbai in the 70’s when mafia was emerging and Sultan (Ajay Devgan) was ruling the city until Shoaib (then played by Imraan Hashmi) his protégé ditches him and takes control of the mafia of Mumbai (then Bombay) and flees to Dubai.

The sequel starts with Shoaib (now played by Akshay Kumar) is the ruler of Mumbai who operates from Dubai. His enemies like Rawal (Mahesh Manjrekar) try an assassination attempt on him in Dubai. In order to teach him a lesson Shoaib returns to Mumbai to kill Rawal with the help of his protégé Aslam (Imran Khan) but eventually falls in love with a struggling actress Jasmine (Sonakshi Sinha) not knowing that Aslam his protégé is also in love with Jasmine. Rest of the plot mainly concentrates on the love triangle.

The story & screenplay by Rajat Arora starts off as a gangster flick but ultimately ends up being a love triangle and there is where the film fails to live up to its expectations created by its previous part. The second half is extremely stretched and too many songs slow down the pace and the run time also increases. Another issue is, there are too many characters and sub plots which have no relevance to the main story.

The real highlights of the movie are its dialogues just like its previous part, which is again written by Rajat Arora. Every scene is packed with metaphors & punch line, but at times it also becomes repetitive and monotonous.

Akshay Kumar looks good as the gangster Shoaib but his act becomes repetitive after some time, though it shows he is trying hard. Imran Khan as Aslam is a miscast and never in the whole movie does he look convincing as a henchman, though he is good in the romantic scenes. The surprise packet is Sonakshi Sinha, she lightens up the screen whenever she is there, at times she overshadows Akshay & Imran in a few scenes. Sonali Bendre as Mumtaz (previously played by Prachi Desai in the first part) is wasted but she shines in the 2 scenes that she has in the movie. Mahesh Manjrekar does not impress too much. Abhimanyu Singh does not give the same punch which Randeep Hooda did in the first part. Overall other than Sonakshi Sinha none of the other actors create any impact.

Cinematograhy by Ayananka Bose is superb and captures the Mumbai in 80’s well. Production Design by Priya Suhas is excellent and creates the right ambience of 80’s Mumbai. Costumes by Manish Malhotra & Kunal Rawal do justice to the period. Overall the Cinematography, Production Design & Costume Department takes the movie a few notches above the first part.

Music by Pritam is average and does not have any song which is impactful unlike his scores in the first part.

Director Milan Luthria has gone completely wrong in the casting in this film and other issue is that he is not sure whether he wanted to make love story or a gangster flick. The length is another drawback. I would go with 2 and a half stars….