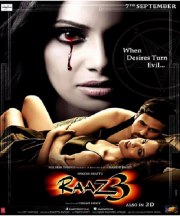 Vikram Bhatt returns to the Bhatt camp to direct Raaz3, a lot was expected since the Raaz franchise was formed way back in 2002 with Vikram Bhatt & Mahesh Bhatt combination….but it turns out to be a sophisticated version of a Ramsay genre of Horror.

The story revolves around Shanaya Shekhar (Bipasha Basu) who is a fading actress who cannot accept defeat; hence to re-gain her lost glory she takes help of Black magic to create havoc in the life of upcoming actress and her competitor Sanjana (Esha Gupta) with the help of her director boyfriend Aditya (Emraan Hashmi), how it effects the life of these 3 individuals forms the crux of the story.

The story & screenplay by Shagufta Rafique could have been better but Shagufta takes the hackneyed path of Tantrik, Shaitan, Kabrastan, God V/s Evil etc putting it in the mould of the 80’s Ramsay genre of horror. The characters other than Shanaya’s are half developed and become card board characters common in any horror movie. It has no shock element which is required in a horror movie; rather some sequences are unintentionally funny like an atma calling Bipasha on her cell phone to update her about the proceedings. It has overdose of melodrama which looks too artificial.

Amongst the performances Bipasha who plays the evil just has one expression throughout the movie, she has done better in other movies wherein she has played the negative role. Emraan Hashmi sleep walks through his role and looks utterly dis-interested a lot was expected after a sparkling performance in “Shanghai”. Esha Gupta is the weakest link, her expressions sometimes are funny. The best performance is of Manish Choudhary’s who plays the shaitan Tara Dutt.

The music is average which is a surprise for a Vishesh Films and so is the background music. The special effects is the only saving grace of the movie especially the cockroach sequence, the 3 D format is justified only in this sequence..

Vikram Bhatt has completely lost the plot after 1920, there is no Raaz in this Raaz…my rating ONE & a HALF STAR….