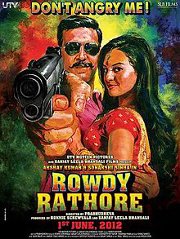 true South remake with dollops of mindless action, cleavage show, loud music, disjointed screenplay etc. “Rowdy Rathod” has everything which can be termed as cheap & trash.

The story or should I say the lack of it is straight out of a 80’s pot boiler, the lead actor Akshay Kumar has double role, one a honest Cop and other a con man, can’t be more predictable than this. The honest cop Vijay Rathod, is posted in a small town of Bihar Devgarh, which is ruled by local goon Bapji(Nasser) and his brother. The honest Cop makes life hell for the goon. The goon attacks the Cop and kills him, wait there is a twist actually he is not dead and he is taken to a hakim by his colleagues and then to Mumbai for further treatment which the goon is completely unaware. Mumbai is the city wherein the “Humshakal” con man Shiva lives and he is mistaken as the cop. After a lot of drama the con man is persuaded to go to Devgarh as the cop who is now dead, then as expected the con man has a “Hriday Parivartan” and takes revenge from the goon and everybody live happily ever after. CONFUSED, well I said there is strictly “NO STORY”.

The screenplay is full of senseless action, songs which just comes with no relevance. The comedy track is utterly cheap. I am shocked a renowned production house like UTV and a director like Sanjay Leela Bhansali can even support such a “TRASH”.

Acting is replaced by hamming, Akshay Kumar hams throughout, Sonakshi Sinha is there only for the songs and pelvic thrusts. A actor like Naseer is wasted, rest of the cast are over the top.
The music is targeted to the front benchers which Sajid Wajid has mastered by now. The lyrics are senseless. With Prabhu Deva as the director we expect good choreography but SAD the dances are cheap & vulgar with only pelvic thrusts.

Overall “Rowdy Rathod” is definitely not a movie of 2012, it is from the genre of 1980’s trash pot boilers, but it still had an element of entertainment. But unfortunately “Rowdy Rathod” is far from being entertaining. “ONE STAR” from me….

One thought on “Review : Rowdy Rathore”