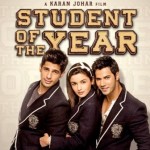 Let us accept it that KJo has created his own brand of cinema, which you can love or hate but definitely cannot ignore it & SOTY is exactly the same

SOTY  is a story of two friends Rohan Nanda (Varun Dhawan) & Abhimanyu Singh (Sidharth Malhotra) who meet in St Teresa who initially hate each other but eventually become friends until the “Student of the Year” challenge is declared by the dean Yogendra  Vashisht (Rishi Kapoor). The challenge turns the friends into competitors, how it plays havoc in their lives forms the basis of the story…

Though the story is predictable but the screenplay by Rensil Dsilva creates the impact, some sequences are very well written and some look a bit amateurish, like the main challenge to win “Student of the Year” looks weak. The pace is slow at times. The dialogues of Niranjan Iyengar makes up for the loose screenplay, it is spunky and the lingo is contemporary adding to the zing.

The debutants especially Varun Dhawan and Sidharth Malhotra are impressive, they grow as the movie progresses. Varun in particular excels both in acting as well as dancing, a lad to watch out for. Sidharth does justice to whatever given. Alia Bhatt has little to do, her character reminds you of Poo in K3G but without the spunk, but overall she is decent. The main highlight is the support cast especially Rishi Kapoor who plays the gay dean with panache; his portrayal is both funny and moving. Other cast like Ronit Roy, Ram Kapoor, Kayoze Irani, Sana Saeed, Mansi Rach, Sahil Anand & Gautami Kapoor are impressive.

The music by Vishal Shekhar is good and so is the picturization by Farah Khan, Vaibhavi Merchant, Bosco-Ceaser & Remo. All the songs are lavishly shot and the look is rich, but the Disco Song by Remo & Radha song by Farah Khan stands out.

The camera work by Ananyanka Bose is good. How can you miss the costume designer in a Karan Johar movie both Manish Malhotra & Shiraj Siddique do a splendid job which gives the movie the zing.

In a nutshell SOTY is lavishly mounted candy floss over the top KJo –ish type of Bollywood cinema which is aptly shouldered by Varun Dhawan & Sidharth Malhotra. 3 stars from me, one extra for the debutants.