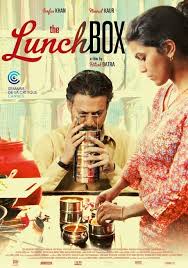 The Lunchbox: A Sumptuous Meal

Ritesh Batra’s first offering is like a three course meal which has all the spices albeit in apt proportion.

The story is of a to be retired Govt Employee Sajan Fernandes (Irfan Khan) a widower and Ila (Namrit Kaur) who is a housewife and whose life exists around her husband Rajeev (Nakul Vaid) and her daughter Yashvi. Ila’s only companion is her neighbor Mrs. Despande (Voice of Bharati Achrekar) who gives her tips how to make her husband happy. One day the lunchbox meant for Rajeev by mistake is delivered to Sajan and it starts a conversation between Sajan and Ila through

letters which they sent to each other in the lunchbox. How the relationship between these two characters blossoms constitutes the crux of the story.

The main hero of the movie is the script and story written by Ritesh Batra. It is poignant, honest and extremely heart wrenching. It captures the loneliness of staying in a big city beautifully. The story is sweet, humorous and at the same time sad, definitely a beautiful mix. The screenplay is slow but the details that it captures somehow compensates to the slow pace. Ritesh has written every sequence with élan. It is undoubtedly one of the best stories of 2013.

Performance wise it is brilliant, what can you expect with Irfan Khan & Nawazuddin Siddiqui in the same frame, it was crackling. But surprise packet is Namrit Kaur as Ila who is relatively new to bollywood but she shines with her riveting performance which matches the likes of Irfan and Nawazuddin, truly brilliant. Her loneliness is depicted quite expressively by her expressions.
Irfan as Sajan is brilliant; his precision in the characterization is to be seen to be believed. Nawazuddin Siddiqui as usual gives another crackling performance. Bharati Achrekar though is only heard as Mrs Deshpande gives a dynamo performance through her voice, she actually gives the comic relief to the proceedings. Another performance by Lilette Dubey who plays Ila’s mother is impactful, though she is actually in two scenes but she does justice to her character.

Cinematography by Michael Simmons captures Mumbai beautifully and gives enough depth to the story. Production design by Shruti Gupte is realistic and minimalistic and does not overcrowd the proceedings of the story.

Ritesh’s direction captures the nuances of the characters correctly and makes the characters believable. He has captured the pains and loneliness of his characters through their expressions.

“The Lunchbox” is a fulfilling meal, the taste of which lingers even after the movie is over. A definite watch. I will go with 4 stars.