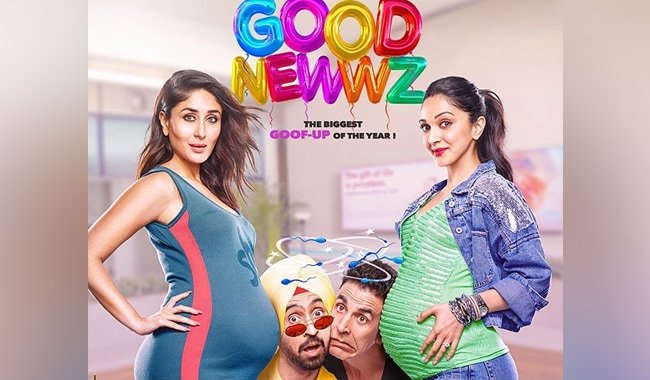 It is really a good time for Bollywood wherein new and innovative concepts are being tried and big stars are being a part of it getting in the moolah for such subjects.

GOOD NEWWZ is one such movie wherein the concept is new, the treatment is new, the writing is innovative and to top it a brilliant ensemble cast. Well in short the ingredients required for a entertaining film, and GOOD NEWWZ ticks all the boxes and entertains you and how.

Story by Jyoti Kapoor and screenplay by both Jyoti Kapoor and Rishab Sharma is taunt and entertaining. The premise of two couples who share their surname Batras and the mix up of their In-Vitro- Fertilization (IVF) treatment is new and never tried before. The novelty is strong point of the script, but the writers make it hilarious from the word go that the 132 minutes of run time just passes making you laugh till you drop. Though there is a dollop of melodrama in the pre climax, but gears back being comic and ends with a smile on your face. Definitely a well written script though I felt the songs were a deterrent in the flow.

Rishab Sharma’s dialogues are like the cherry on the cake which accentuates the scenes. Rishab is not only good in comic sequences but in some emotional scenes his writing shines like the Katerina Kapoor’s outburst scene will give you that emotional punch.

The biggest plus of the movie is the brilliant ensemble cast. Akshay Kumar as Varun Batra is the most entertaining character and Akshay’s comic timing is so impeccable that didn’t miss a beat and makes you laugh till the end. Kareena Kapoor as Deepti Batra the Uber high society wife of Varun, is an apt casting for the role, she effortlessly plays Deepti and is brilliant in both comic and emotional sequence. Both Kareena and Akshay’s chemistry raises the movie to different level. Diljit Dosanjh as the over the top Honey Batra plays the contrast of Varun with ease and his comic timing with Akshay is a delight to watch. Kiara Advani as Monika Batra, Happy Batra’s wife is a revelation. For Kiara it was daunting task to match her performance with the rest 3 seasoned actors, but she does not disappoint and does complete justice to her character. Both Adil Hussain and Tisca Chopra as the doctor couple adds up to the fun quotient. Rest of the cast also do a good job.

Debutant director Raj Mehta does a brilliant job with his first film which is a wholesome entertainer. He takes a serious subject and makes a comedy out of it, definitely not a mean task. Kudos to Raj to even attempt such a subject as his debut movie. And the way he balances the emotional scenes and the comic scenes is to be seen to be believed. Definitely a director to watch out for.

GOOD NEWWZ brings the good news of an entertainer in this holiday season. With a taut script and some brilliant performance, GOOD NEWWZ is a must watch.