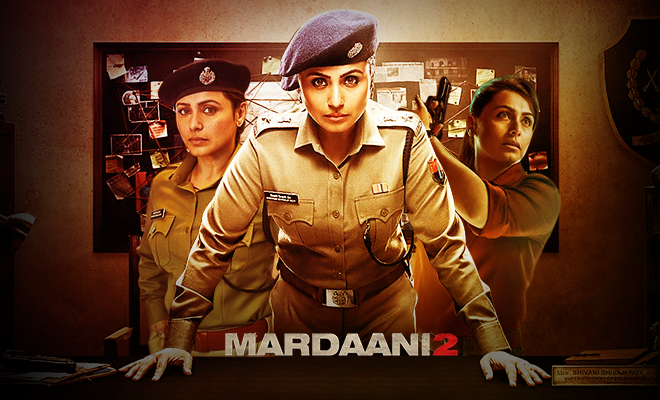 MARDAANI 2: It’s a Rani Mukerji show all the way

The plot this time is set in the educational town of Kota, where a psychopath serial killer is in a rampage of raping girls and killing them brutally. The plot shows how Shivani ( Rani Mukerji) unravels the truth and whether she gets the serial killer or not.

Unlike it’s predecessor MARDAANI which was in a realistic mould, writer director Gopi Puthran makes it a mix realistic cinema with some Bollywood masala. But it entertains fully and keeps you on edge of the seat fully. Packaged in 105 minutes run time the movie is fast paced and crisp not wasting any time on any other elements and concentrating on the main plot. Though I felt a few sequences could have been omitted and some blatant cinematic liberties have been taken, but the final outcome is ENTERTAINING.

Rani Mukerji as SP Shivani Shivaji Roy shines and how, she is just brilliant and one of the main reason to watch this movie is Rani. Just like it’s prequel wherein Tahir Raj Bhasin was introduced as the antagonist and who made a mark with his very first movie, similarly in MARDAANI 2, Vishal Jethwa is introduced as the antagonist Sunny. And I must say Vishal as the find of 2019, he surpasses all expectations with his flawless performance. He adapts to the character so well that you will feel the chill whenever he is on screen. Looking forward to see more of this actor in future movies. Rest of the cast also do a brilliant job. In short the movie outshines in the performance department and takes the movie a notch higher.

It would be a mistake by comparing MARDAANI to MARDAANI 2, but the way Pradeep Sarkar helmed the prequel, Gopi Puthran matches his predecessor to a large extent. Gopi as a debut movie shines and showcases his calibre well. Gopi is definitely a film maker to watch out for.

To create the right atmosphere Jishnu Bhattacharjee’s camera work works wonders for the movie. Must mention the superlative work of editor Monisha Baldawa who did a very good job making the movie crisp and engaging.

MARDAANI 2 is well packaged movie with a taut script and direction by Gopi Puthran with some brilliant performances by Rani Mukerji and Vishal Jethwa which makes the movie a must watch. Apart from some blemishes which can be overlooked the movie is entertaining.