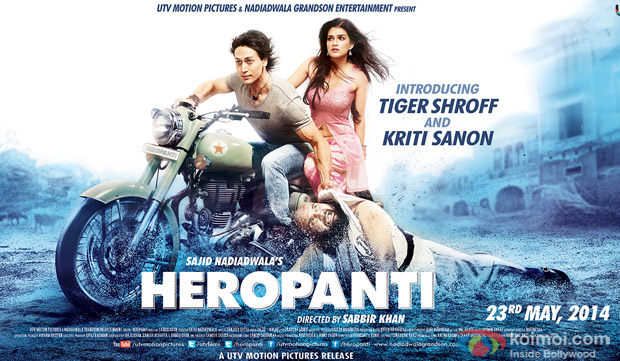 On the onset let me set the expectations that Heropanti is no classic and is a complete launch vehicle for Tiger Shroff.

The story and script written by Sanjeev Dutta is primarily focusing on the main protagonist played by Tiger. Heropanti is a quintessential love story of a rich girl Dimpy played by Kriti Sanon and a middle class guy Babloo played by Tiger Shroff. The screenplay is very smartly designed so that there are enough opportunities for histrionics, action and dance for Tiger. The problem with the script is with the characters which do not have any depth and are cardboard like. Babloo’s character does not have any background and his families, the characters of his parents are conspicuous by their absence. The dialogues are witty and all the best lines are reserved for Tiger. The dialect of the dialogues is inconsistent. In a love story the chemistry between the lead pair is essential but unfortunately it is absent.

Tiger is undoubtedly a STAR with his forte of action and dance he creates enough impact and “Ceeti” (Whistle) moments for the audience but as far as his acting abilities are concerned he needs to work hard especially on his Hindi dialect. Debutant Kriti Sanon who plays Dimpy shows spark. Prakash Raaj as Dimpy’s father creates impact but the scripts fails him. Other casts are average.

Director Sabir Khan shows a growth as a director after “Kambaqt Ishq” and exploits and showcases Tiger’s ability to the hilt but overall Sabir gives us an average fair, but Tiger shines. I will go with TWO AND A HALF STARS….