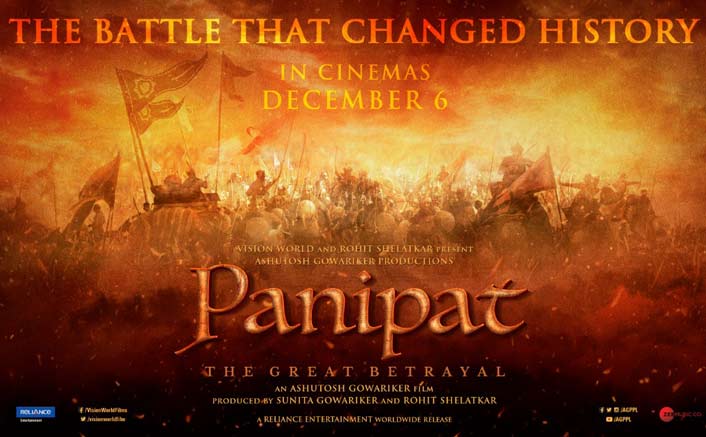 Panipat: It is PANI PANI of a historical event

Movies on a Historical event or a biography are two genres which are immensely difficult to capture on celluloid. It may come out as a masterpiece and classic or it may result in a poor copy no chances of anything mid way.

Well Ashutosh Giwarikar is one director who did some brilliant work with LAGAAN and JODHA AKBAR in period genre the latter being a historical. But lately he had some misadventures starting with KHELE HUM JEE JAAN SE and his very last outing MOHEN JO DARO. PANIPAT unfortunately is another addition to Giwarikar’s misadventures.

Based on the famous third battle of Panipat , the movie adaptation is far from being a good cinema forget about a masterpiece. Adapted

by Ashutosh himself along with Chandrashekhar Dhavalikar and Ranjit Bahadur the story and screenplay is  patchy and extremely amateurish.The characters come out cardboardish and extremely stiff with no soul  whatsoever and the patchy dialogues by Aditya Raval doesn’t help.

Another major problem that the film suffers is it’s casting or should I say miscasting, starting with Arjun Kapoor as Sadashiv Bhau, continues his spell of being wooden as his previous outings. Kriti Sanon as Parvati Bai, Sadashiv’s wife still made sense in her not so well written character, rather whenever she is on screen the movie becomes a bit lively. And now coming to Sanjay Dutt who played the cruel crusader from Afghanistan Admed Shah Abdali, sleep walks throughout the role. I felt that Sanjay Dutt had difficulty mouthing the dialogues as well. As far as the rest of the cast is concerned namely Mohnish Behl, Padmini Kolhapure, Zeenat Aman (in a cameo), Kunal Kapoor (one of the worst performances of the movie) hardly make any difference.

It is only the last 10 mins of a 173 minute film that the movie comes live during the battle sequence and climax PANIPAT is an absolute disappointment from Ashutosh Giwarikar, after watching this movie you will fail to believe that it is him who made heart wrenching movies like LAGAAN, JODHA AKBAR and SWADES, ( one of Shahrukh’s best performance). I still believe that Ashutosh can shine.