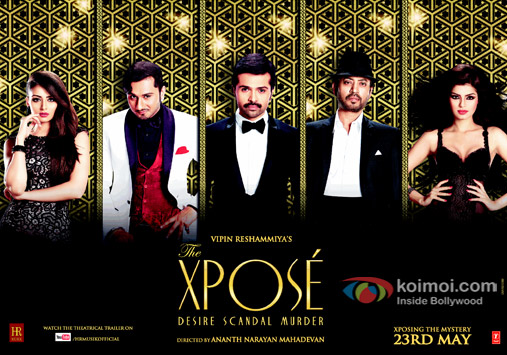 The Xpose: Too much Xpose of nothing

The Xpose claims to be inspired by true incidents from Bollywood of the 60’s. Anant Mahadevan tries to re-create the magic of 60’s through a murder mystery.

The main issue of the movie is the plot and story which is hackneyed and predictable which is a curse for a murder mystery and it is credited to none other than Himesh Reshamiya (Gawd first Music, then acting and now writing). Himesh Reshamiya and Jainesh Ejardar ‘s screenplay is just a mish mash of headline stories of Bollywood gossip columns of 60’s and 70’s. So it has an eccentric superstar, rivalry and catfight between 2 actresses, Publicity being used to make a film successful and the list goes on. In short it has everything which we have seen in many previous movies based on Bollywood, and the only twist is the murder mystery which is extremely half baked and looks amateurish. There are too many characters which has no relevance to the core story at all. Dialogues by Bunty Rathore is very 80’s and at times unintentionally funny.

Not much can be said about the performance as well. Himesh Reshamiya as the quirky super star Rajiv Kumar is monotonous and at times wooden. The two debutant actresses Zoya Afroz and Sonali Raut are average and are only there for skin show. Yo Yo Honey Singh as KD sleep walks through the movie. Other actors like Anant Mahadevan himself, Nakul Vaid, Bharat Dhabolkar, Jesse Randhawa are average and are lost in the half baked narration. The two bright actors Irfan Khan and Adil Hussain are wasted in a cameo.

Cinematograhy by Maneesh Chandra Bhatt gives the glossy look which is the only redeeming factor in the movie. Rest of the departments like costumes which is credited to a host of designers lacks the accuracy of its era portrayed and it imitates the Great Gatsby look. Production design also looks straight out of the Great Gatsby. I guess the reference point was “The Great Gatsby”.

Music by Himesh Reshamiya is good but too many songs slackens the pace of the narration. Choreography by Ganesh Acharya especially “Ice cream Khaoge” is lavish, again it imitates “The Great Gatsby” blatantly.

Overall a half baked movie by Anant Mahadevan, I will go with ONE Star….