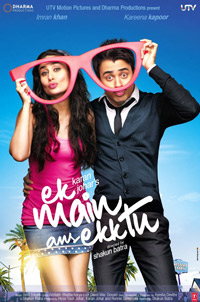 “EMAET” is coming of age mainstream Hindi Movie. The story revolves around Rahul

Kapoor (Imran Khan) a mama’s boy, whose parents played by Ratna Pathak Shah & Boman Irani dictate his life till he has a chance meeting with Rihana Braganza (Kareena Kapoor) in Vegas and in a drunken stupor gets married to her post which how his life changes forms the crux of the story.

You may find a slight resemblance to “It happened in Vegas” the Cameron Diaz & Ashtun Kutcher movie, but this is a much better movie. Shakun Batra defines the new age showmen of Bollywood with their fresh approach to mainstream hindi movie. Shakun’s story and screenplay is without any of the apt repeated clichés and a true date movie. The climax is the highlight of the movie and Shakun does not fall in the trap of the typical hindi movie and gives a very mature and practical end. The screenplay is the highlight of the movie which chronicles 25 days of the lead pair and is very fresh. Do not expect any melo-drama or over the top sequence, it is subtle but impactful.

The Kareena Kapoor & Imran Khan pairing has an unusual chemistry and they successfully balance their act. Especially Imran Khan who does a commendable job and Kareena Kapoor again re-establish the fact that she is the true Diva with her brilliant portrayal of Rihana Braganza. The support cast like Ratna Pathak Shah, Boman Irani, Soniya Mehra, Ram Kapoor do justice to their respective characters.

The Cinematography of David Mac Donald is breath taking and captures Las Vegas and Mumbai beautifully. Music by Amit Trivedi does justice to the story especially the title track, Gubbare & Aunty ji. The lyrics of Amitabh Bhattacharya is soulful especially “Gubbare”, slowly Amitabh is becoming our modern age Gulzar.

“EMAET” is your new age Hindi Masala pop corn fair. A WORTH WATCH; 4 Stars from me.