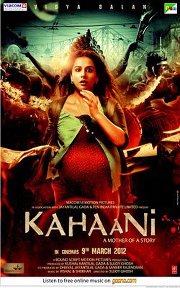 “Kahaani”, another power house performance by Vidya Balan, the story is of Vidya Bagchi (Vidya Balan), a software engineer from London who comes to Kolkata in search of her husband Arnab Bagchi (Indraneil Sengupta) who goes missing in Kolkata. The story revolves around how Vidya unfolds the mystery of her missing husband.

The main highlight of the movie is the tout story and screenplay by Sujoy Ghosh & Advaita Kala which keeps the audiences glued to their seat till the end. Each character is well defined and fits into the puzzle called “Kahaani”, truly a story well told.

Another highlight of the movie is the crisp editing by Namrata Rao which does not let the movie lose its pace even for a minute. Setu’s camerawork captures the true spirit of Kolkata and adds up to the drama of the story.

Now let me mention the captain of the ship, the director Sujoy Ghosh, who makes a comeback with this movie, and what a comeback. “Kahaani” will be go down history as one of the best thrillers of Bollywood. Sujoy is in complete control and it shows in the way he has handled such a complex story with so many layers.

Now the biggest highlight the cast. Vidya Balan once again proves her brilliance in her portrayal of Vidya Venkatesan Bagchi, from the body language of a pregnant woman to her expressions Vidya Balan has done complete justice to the character. Another actor Parambrata Chattopadhyay who plays the role of the Police Inspector Satyaki Ghosh alias “Rana” is brilliant and so is Nawazuddin Siddiqui who plays the CBI Inspector Khan. Another Bengali actor who makes an impact is Saswata Chatterjee who plays “Bob” a LIC agent; whenever he comes on the screen it gives the audience the chill. The support casts like Dhritiman Chatterjee, Indraneil Sengupta also do a good job.

The music by Vishal-Shekhar is as per the mood of the movie. Especially “Piya tu Kahe” a hard rock with a fusion of Indian Classical and Amitabh’s rendition of Rabindranath Tagore’s “Akla Cholo Re” are the highlights.

Overall an entertaining thriller which has an impact which lingers long after the movie is over. A must watch and please note “DO NOT MISS THE BEGINNING”, I give 5 stars, one additional star for capturing Kolkata so beautifully.