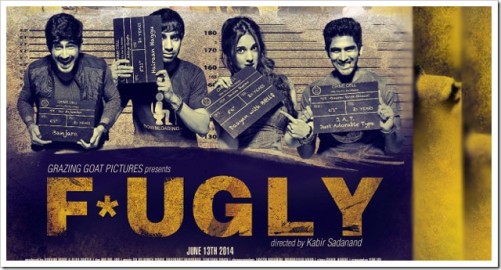 F*UGLY: A Half Baked Attempt of a good concept

F*UGLY, the name seems unusual and hatke, I kept wondering what it really meant, well the beginning credits clarifies the same; it meant “FIGHT AGAINST INJUSTICE”. The hatke quotient stops in the name itself.

So Fugly delves in the latest trend of exploring our Capital Delhi. The story is of 5 friends, Dev (debutant Mohit Marwah), Devi (debutant Kiara

Advani), Gaurav (Boxer Vijendra Singh) and Aditya alias Haggu (Arfi Lamba), who lead a chilled and care free life. In one incident wherein Devi is molested by a grocery shop owner and the friends decide to teach him a lesson and kidnap him and enroute they have an accident with a police van and they meet Police Inspector Choutala (Jimmy Shergill). This incident changes their life forever and Choutala starts blackmailing them and how these friends fight against Choutala and the system constitutes the rest of the story.

The first problem is the story by Rahul Handa which is Rang De Basanti Meets Fukrey,it hangs between being comedy or a serious issue based movie and does not have the punch. The second problem is with the screenplay which is slow and the sequences look too half baked and without the punch and the transition from flash back to present looks disjointed. The songs have no relevance to the story and look forced. And the biggest is the climax which does not justify the overall narration. The dialogues by director Kabir Sadanand and Rajveer Ahuja ranges from being witty to unintentionally funny. The characters look too monotonous and repeated.

Performance wise it needed more punch from the debutants, Mohit Marwah as Dev looks too stiff and needs diction lessons as his dialogues are not clear. Boxer Vijendra Singh sleep walks through his role of Gaurav and is average as the fun loving Jat. Kiara Advani as Devi is crackling and justifies her character well and she shines amongst the other debutants Mohit and Vijendra, watch out for this girl. Arfi Lamba as Aditya becomes quite monotonous after a point and his comedy tracks look forced. Jimmy Shergill as R S Choutala is the bright spot of Fugly, he is just superb and rises above the writing with his brilliant portrayal, another under rated actor of Bollywood. Rest of the cast sleep walk through their portrayal.

Another problem is the editing by Shounok Ghosh, it is not crisp and overall flow looks bumpy. Cinematography by Milind Jog is good and captures Delhi & Ladakh well.

The Music by Yo Yo Honey Singh sounds repetitive and other music directors Raftaar and Prashant Vadhyar does not impress.

Kabir Sadanand took a topical subject but fails in the narration, it neither falls into the category of serious cinema nor a comedy. Kabir also stumbles is extracting a crackling performances by the cast excluding for Jimmy Shergill and Kiara Advani. Overall I will go with 2 Stars…one Star for Jimmy and Kiara.