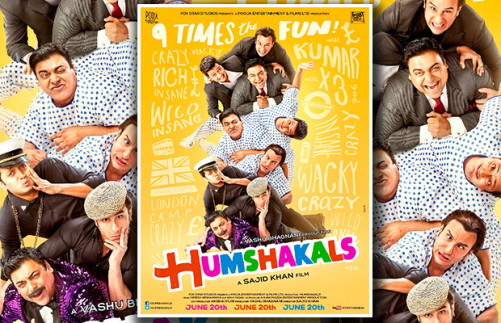 So Sajid goes back to his “Housefull “ mould of European mansions, swanky cars, heroines wearing skimpiest costumes and too many characters who are a caricature. Sadly for “Humshakals” it falls flat and what we get is a trash in the name of comedy.

The Story written by Sajid Khan of three sets of Humshakals of Ashok (Saif), Kumar (Riteish) and Mamaji alias KANS (Ram Kapoor), one set of Ashok who is heir to the multimillion empire of Sighanias, Kumar who is Ashok’s best friend and Mamaji who is scheming to confiscate the empire from Ashok, another set wherein all three are mental patients Ashok, Kumar & Jhonny, and third set consists of Ashok and Kumar who are feminine by nature and Mamaji who is bar dance owner. CONFUSED well this just the beginning, Sajid thought that he could actually better Shakespear’s Comedy of Error but alas there is no story.

Screenplay should I say the lack of it credited to Robin Bhatt, Akash Khurana and Sajid Khan is just a shocker and imagination just goes wild. A sequence has a doctor giving a medicine potion which makes human beings act like DOGS and you see both Reteish & Saif acting like dogs well this is utterly insane in the name of comedy. The Dialogues by Sajid Khan and Adhir Bhatt is equally bad what with “Aap Meri Zindagi mein Aaye to Mere Bacche Ka Baap Ban Jaye”….

The performances by the ensemble cast is just too childish to laugh, for Saif I think this is his worst performance till date. Making faces does not suffice for acting and Saif is so bad when he is imitating actors. Reteish still gives you a few laughs but he could not salvage the mayhem around. Ram Kapoor looks completely lost all throughout the movie. Satish Shah as the warden hams all throughout. The actresses have no scope to act, they are there as eye candy wearing skimpiest clothes. I can still understand for Tamanah Bhatia and Esha Gupta who are relatively new and hence they did this film but why the hell did Bipasha Basu do this film she looks like a glorified extra in the movie.

The only good thing about the movie is the cinematography by Ravi Yadav which is good and catchy to the eye. Music by Himesh Reshamiya is extremely average, excluding “Caller Tune” none of the other songs are worth mentioning.

Sajid Khan’s “Humshakals” has outdone Ram Gopal Varma’s “Aag” in making Trash, and RGV’s “Aag “ looks like a classic in front of SK’s “Humshakals”. Sajid Khan has to relearn what is entertainment before venturing to his next project. I will go with “NO STARS”