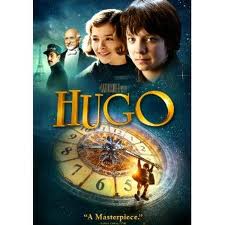 “Hugo” which swept all the Oscars in the technical categories at last released in India after 6 months from its original release in US in Nov’11. Based on the book by Brian Selznick “The Invention of Hugo Cabaret”, Hugo is a story set in 1920’s Paris after the World War and tells us about the last days of Georges Melies, who was an illusionist as well as one of the profound film makers of silent movies.

The story is primarily of  Hugo Cabaret (Asa Butterfield) who is orphaned after his father (Jude law) dies in a freak accident and is forced to stay in the Train Station taking care of the clocks as instructed by his uncle (Ray Winstone), the only possession that he has of his late father is a defunct “Automaton” which is tries to revive by stealing toys from the station toy shop owned by Georges Melies (Ben Kingsley). He gets caught by Georges and his book on the “Automaton” is confiscated by Georges which he threatens to burn. Hugo takes the help of Issabella (Chloë Grace Moretz) who is the adopted daughter of Georges. The story then leads to how Hugo & Issabella come to know the past of Georges Melies and helps him to return to his old glory forms the crux of the story.

“Hugo” is a visual treat with fantastic camera work by Robert Richardson and superlative production design by Dante Ferretti which captures the 1920’s Paris in its full glory. The 3 D Format enhances the visual appeal. Some of the sequences like the train crash sequence; the sequence wherein Hugo is hanging on the large Station Clock is breathtaking.

The superlative performances by Asa Butterfield as Hugo, Ben Kingsley as Georges Melies, Chloë Grace Moretz as Issabella and the rest of the cast takes the otherwise slow screenplay to a different level.

Full marks to Martin Scorcese for paying a tribute to movies of the silent era and introducing that era to our generation. The movie has an old world charm which has been lost in today’s movies. 4 stars from me.