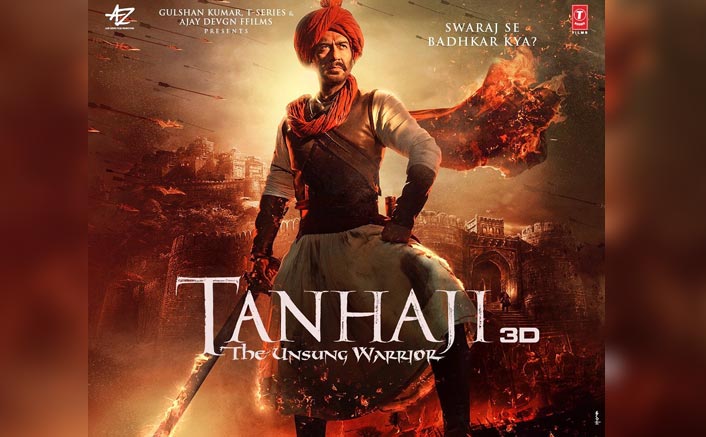 There are some movies which are larger than life and needs to be seen only on a BIG Screen format. TANHAJI THE UNSUNG WARRIOR is one such movie.

TANHAJI is based on the real life incident of reclaiming of Kondhana Fort from the Mughals, which was lost by Shivaji as per a treaty with Mughals. The entire operation of getting back the fort was orchestrated by Shivaji’s confidant Tanhaji Malusare against the then commander of the fort Udaybhan Rathod. So TANHAJI encapsulates the pre operation events leading to the secret siege by the Marathas, wherein Tanhaji postpones his son’s marriage for the operation and ends with the ultimate win by the Marathas and Tanhaji’s sacrifice.

Well this is a story which is pretty known in Maharashtra, and is also a text book chapter in school, but frankly nothing is known about Tanhaji as a person which is documented in history other the Kodhana siege, and with regard to Udaybhan Rathod nothing whatsoever. Hence it was quite a task for the writers the director Om Raut himself with Prakash Kapadia weave in a story of 151 minutes. What Om
and Prakash have done is taking the snippets what is known and created half factual and half constructed events to make a narration. The script has the right mix of history and drama which is fast paced and does not give you any chance to be bored. Yes it exploits the patriotic feeling and is melodramatic in parts but it does not make you cringe. The characterization is completely black and white here with no layering. Overall the writing is not perfect but it has a soul and that kind of connects with the audience and you are entertained.

Performance wise Ajay Devgn as Tanhaji brings the required valor and honesty to the character which connects and that was the biggest triumph for the movie. Saif Ali Khan as Udaybhan plays quintessential villain to the T, and you can see that he is enjoying. He plays the BAD guys to the hilt and is complete contrast to Ajay’s character. Both powerhouse actors coming together after OMKARA was a delight to
watch. Kajol as Savitribai, Tanhaji’s wife has very less screen time but whatever she has she shines. Sharad Kelkar as Shivaji Maharaj was the best casting of the movie, his looks and his whole body language is so believable that you start seeing him as Shivaji Maharaj and not Sharad Kelkar the actor. Padmavati Rao as Rajmata Jijabai brings the essential aristocracy required for the role and fits into the mould to the T. Luke Kenny as Aurangzeb is good but does not create any impact. Rest of the ensemble cast also do a good job.

Some of the major highlights of TANHAJI is its brilliant cinematography by Keiko Nakahara, excellent Production Design by Sriram Iyengar &amp; Sujeet Sawant and off course the brilliant VFX team which is the back bone of the movie, more so since it is in 3D format. All the above create the world of TANHAJI so well that you are drawn to their world from the first frame. And to make the characters alive the
costume design by Nachiket Barve is like the cherry on the cake. The 3D format kind of accentuates the viewing experience, I guess one of the best 3D format movie of Bollywood. Om Raut, with his directorial debut in Bollywood has created a magnum opus with larger than life story telling and a Big screen viewing spectacle, thanks to its brilliant 3D format and extravagant VFX. Not only technically Om also resonates well with his audience on an emotional level and gets the EQ bang on. Though I won’t say that it is a classic but it is definitely an entertainer which is worth a watch on the Big Screen. Om gets it right from the word GO.

TANHAJI: THE UNSUNG WARRIOR is almost like watching an Amar Chitra Katha narration on celluloid, thanks to its brilliant VFX and 3D format and with a simplistic story telling which pulls the heart strings and gets an emotional connect bang on. The complete BIG SCREEN entertainer worth watching in the cinemas.