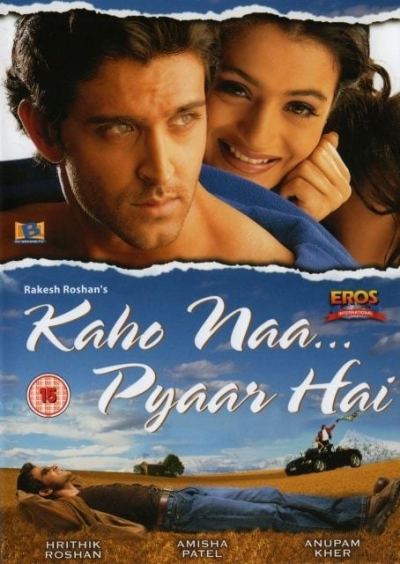 14th Jan’2000 a new super star was born in Bollywood, who had quintessential good looks almost Greek God like and who can dance like a dream and also knew how to act. The launch vehicle for him was KAHO NAA PYAAR HAI and the super star was HRITHIK ROSHAN.

Directed by Rakesh Roshan, Hrithik’s father, the movie written by Ravi Kapoor and Honey Irani had all the masala of a Bollywood pot boiler, the poor boy falling in love with rich girl angle, the double role (Rohit and Raj) and the mystery behind it, the tragedy, the thriller and the song and dance, and to top it all a newcomer who could pull off all this with ease. The script , loosely based 1986 Kanada movie RATHA SAPTAMI, was tailor made launch pad for Hrithik, from emotion to action to dance to foreign locations, it had everything and Hrithik didn’t disappoint.

Along with Hrithik it was Ameesha Patel’s launch movie too, but the original choice to play the female lead was Kareena Kapoor. It was supposed to be Kareena’s debut movie but after shooting for a few days, due to creative difference between Babita and Rakesh Roshan she opted out and Ameesha Patel was signed up as a replacement to play Sonia.

Critically the movie was not well acclaimed but it was Hrithik Roshan’s performance that won over the critics and the audience both. But all had to agree that overall the movie was an entertainer.

The movie was made in a budget of 10 crores, but from the first show itself the movie was declared a super hit and ended up doing a business of 80 crores and being the highest grosser of 2000.

Another big plus for the movie was its music by Rajesh Roshan, it was a huge hit. Songs like “Ik pal kajeena” to “Kyon Chalti hai Pavan” both sung by Lucky Ali are still favorites after 20 years. Rajesh Roshan changed his style and gave us an amalgamation of peppy dance numbers to soulful romantic songs,every song was hit.

Even the choreography by Farah Khan was top notch which elevated the already hit songs, especially the climax concert song “Dil Ne Dil Ko Pukara” was high octane and it was shot lavishly.

Rakesh Roshan did not keep any stone unturned to make his son’s debut a complete entertainer.

KNPH had a sweep in every award function in 2000 wining all the pivotal category awards. I remember going to the theatre with ZERO expectations and coming out star struck. And I have remained star struck with Hrithik Roshan till date.

It has been 20 years and Hrithik Roshan has gone through his share of ups and downs but he still remains the Super Star with Greek God looks who can pull off a Bollywood Actioner “WAR” with equal ease as a “SUPER 30” which was more realistic and too rustic for his persona. He made me cry in “SUPER 30” and gave me the adrenalin rush with “WAR”. Well that is what super star is made of…..

But undoubtedly “KAHO NAA PYAAR HAI” will always remain close to my heart, which gave us the Super Star called HRITHIK ROSHAN.