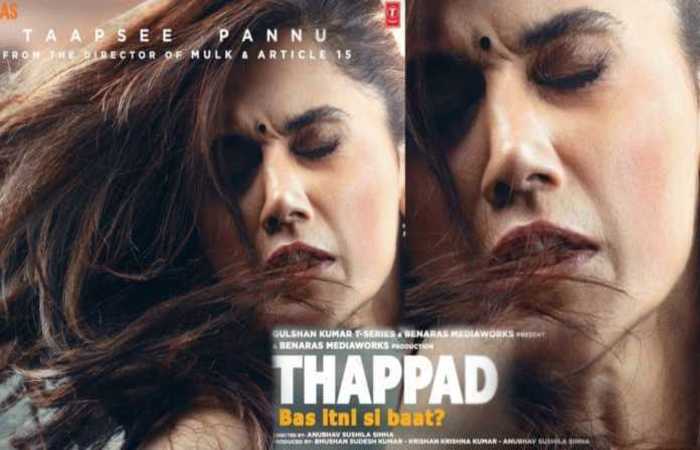 THAPPAD: One Tight Slap on MISOGYNY

On the onset let me warn you THAPPAD is not your regular entertaining movie which will end making you happy, but it makes you cringe and the end of it makes you think as to what is right and what is wrong.

Anubhav Sinha who tackled the issue of caste tolerance in MULK and tackled issue of caste divide in ARTICLE 15, now handles the marital issues prevalent in majority of the Indian household in THAPPAD and he and his co-writer Mrunmayee Lagoo bares it naked without any pretense.

THAPPAD showcases the issues of marriage and relationship across generation and various strata of society through four tracks which inter-mingles into the main track of the marriage issues of Amrita and Vikram. Both Amrita and Vikram are a perfect couple where Amrita (Tapsee Pannu) who is a home maker and her whole existence is around Vikram (debutant Pavail Gulati) and his family. All is hunky dory until one day in a party Vikram slaps Amrita which wakes Amrita from the slumber of her mundane existence. So the slap or should I say the THAPPAD becomes a metaphor. What happens later is what the story is all about.

Kudos to both Anubhav and Mrunmayee who do not cut corners to showcase happy go lucky existence, rather it gives a blatant view of our relationships and how priorities are compromised for the sake of existence. The beauty of the movie are the characters which are written so well that the four tracks that run parallel do not interfere the main track and still create an impact. The writers want you to be uncomfortable which they do successfully and the most commendable part is none of the characters are shown as villains or overtly negative but it their behavior in the situations is what is negative. The writing does not blame anyone instead it shows how men are conditioned because what they have been taught and what they have observed and eventually making them behave how they do. The screenplay uses silences to convey the message and the pre climax sequence though a bit bollywoodish, creates the maximum impact and you come out thinking What if….

THAPPAD scores high on performances. Tapsee Pannu as Amrita the housewife whose world goes for a toss, is brilliant as an understated not aggressive homemaker. Most of the movie Tapsee acts through her eyes and her silences, definitely another feather on her cap. Debutant Pavail Gulati as Vikram, Amrita’s husband, had the most difficult role of the movie, who is a good guy but his reactions are not acceptable. Pavail does a brilliant balancing act with his performance not making Vikram outright villain still at wrong, definitely an actor to look forward. Another actor who creates an impact is Geetika Vidya Ohlyan as the domestic help Sunita, she is brilliant from the word go as a victim of domestic violence and brings the few laughs in THAPPAD. After SONI, Geetika yet again proves her mettle. Maya Sarao as Nethra, Amrita’s lawyer who is not given due credit, fits into her character like glove as a character who is in dilemma though being successful, another impactful performance. Kumud Mishra who plays Amrita’s supporting father, yet again shows his finesse as an actor and performer. Rest of the ensemble cast consisting of Dia Mirza, Manav Kaul, Tanvi Azmi, Ratna Pathak Shah, Ram Kapoor, Naila Grewal, Ankur Rathee all do a brilliant job.

Anubhav Sinha has come a long way from his debut movie TUM BIN and THAPPAD is another feather in his cap. Anubhav has very successfully presented the entire subject without taking sides, which makes the movie brilliant.

Definitely a must watch, I will go with