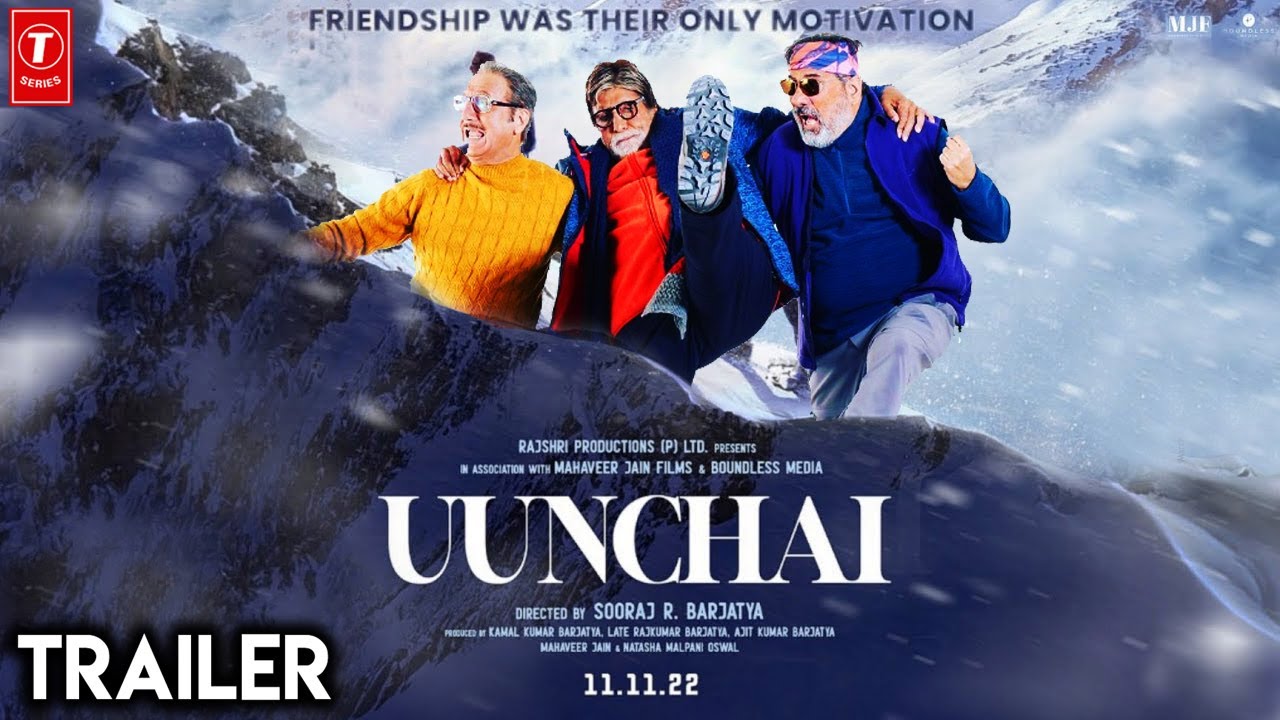 UUNCHAI : is a simple clean wholesome entertainer with emotions at it’s right place

Sooraj Barjatya is synonymous with clean family entertainment and his movies promote family values and Indian culture. For us 90’s kid Sooraj Barjatya has played a huge role in our growing up days, excluding Main Prem Ki Diwani Hoon and Prem Ratan Dhan Payo, two of Sooraj’s weakest movies, his films have been the epitome of culture, values, and family bonding in true Rajshri Production format.

With Uunchai Sooraj Barjatya tries to reinvent himself with the changing times and brings us a heartwarming and a simple story of 3 friends who are in their old age and who plan to trek to EVEREST BASE CAMP for sake of their fourth friend who is no more and who had his last wish of trekking to Everest Base Camp.

The story is simple, it is the screenplay by Abhishek Dixit that makes the difference. The screenplay is very simple but very skillfully put, with an apt amount of emotion which takes the journey of these 3 friends with their complexity of each of their lives and how they overcome reach their UUNCHAI is what the movie all about. It has typical Sooraj Barjatya film emotional moments which make you teary-eyed and also make you laugh in parts, but has its heart throughout the movie.

UUNCHAI reaches it’s height due to his brilliant performances. Amitabh Bachchan as Amit Shrivastava is brilliant as a flamboyant writer who lives his life in style, Big B gets each scene perfect whether it is his flamboyant self or his emotional self in the pre-climax, one of his best performances for sure. Anupam Kher as Om Sharma, blends with the character so well that you cannot make out whether it is for real or is he acting, well another brilliant performance by Anupam Kher after The Kashmir Files. Boman Irani as Javed balances the flamboyancy of Amit and the Stubbornness of Om with an easy-flowing character, and he acted so well that every time he is on screen it will bring a smile on your face. Neena Gupta as Javed’s wife Shabina is like a breath of fresh air and she acted so naturally that you will identify her as your mother or the aunty that you have who controls her family. The chemistry between Boman Irani and Neena Gupta was such a delight every time they had a scene it will give a smile. It was so good to see Sarika back as Mala, she did a brilliant job worth a comeback. Parineeti Chopra as Shradha the trek instructor and guide has not much to do but does a good job. Watching Danny Denzongpa in a cameo as Bhupen was a treat, he still has a brilliant screen presence. The rest of the cast also did a brilliant job.

Kudos to Sooraj Barjatya for casting aging actors and taking up a story on senior citizens and their tribulations. It was a risk for Sooraj to tell a story sans the current trappings of Item songs, young saleable actors and glamour, but he took that risk and went ahead with his conviction. Sooraj as usual gets the emotional parts bang on in the film and pulls your heart strings at the right places. As a director he gets brilliant performances from the ensemble cast which is the highlight of the film. After a not so great PREM RATAN DHAN PAYO, Sooraj gets his groove back with UUNCHAI.

Other than the performances another highlight of the movie is it’s cinematography by Manoj Kumar Khatoi. Manoj captures the visuals of Delhi, Kanpur, Gorakhpur and Kathmandu beautifully. His camerawork shines in the trekking sequences which are just breathtaking.
Songs in Sooraj Barjatya movies are a highlight but in UUNCHAI songs are limited and situational. Music by Amit Trivedi is good and takes the movie forward. But the recall value is only for two songs KetiKo and HaanKarDe. Especially ‘Haan Kar De’ remains with you long after the movie is over.

UUNCHAI is definitely not a classic but it is a simple clean wholesome entertainer with emotions at it’s right place. It is a heartfelt attempt by the makers. The drawback is it’s length with 170 mins of runtime and sometimes the pace of movie slackens and looks a bit dated. But if you are looking for a movie outing with your entire family in the theatre, UUNCHAI is the answer.

Do watch it in theatre as it is a visual treat which only a big screen can do justice.