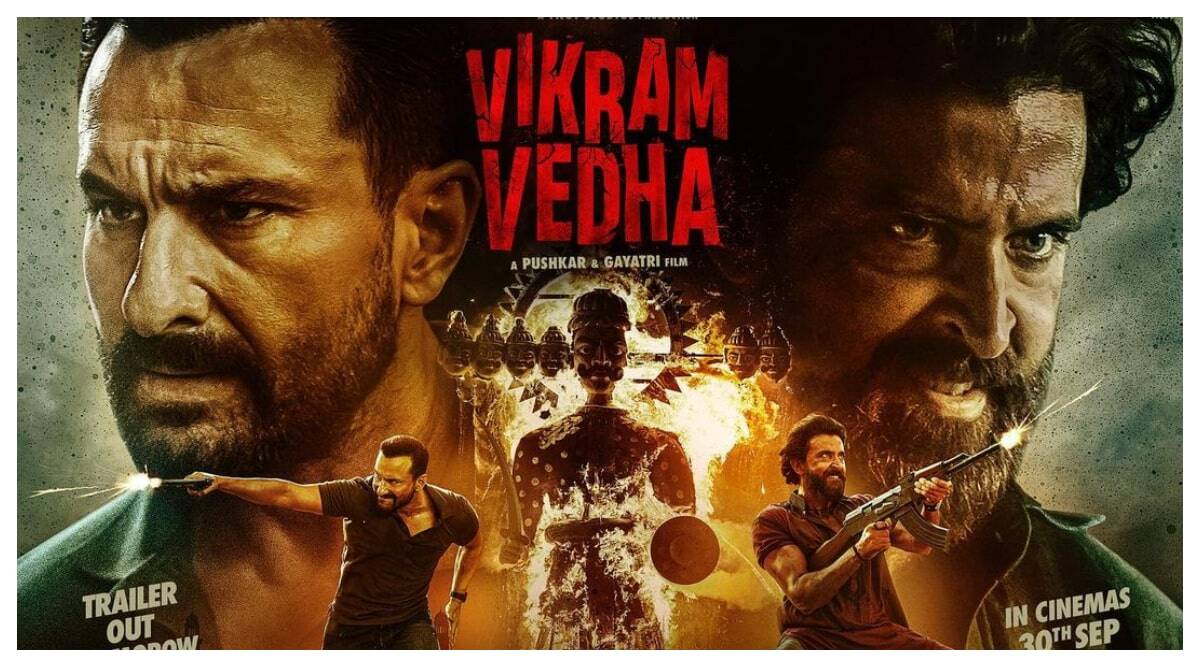 VIKRAM VEDHA : is a decent one time watch

So initially I was skeptical to watch the Hindi remake of the brilliant Tamil movie Vikram Vedha, where the performances of R Madhavan and  Vijay Sethupathi were exemplary. When the Hindi version was launched with stars like Hrithik Roshan and Saif Ali Khan playing Vedha and Vikram respectively, my skepticism was manifold.

Overall VIKRAM VEDHA stays true to the original movie but the writers and directors Pushkar Gayathri change the setup to Lucknow changing the character characteristics and language which I thought robs the movie from it’s inherent seamless flow and rawness which worked for the original. Here the entire setup looked a bit staged especially the Awadhi language sounded a bit forced by every character. The sets also looked too sanitized than the original. Overall it lacked the spark that the original had.

Coming to performances both Hrithik and Saif do a brilliant job and negate my apprehensions. Especially Hrithik who after Super20 somehow has aced the common man portrayal and yet again gives a sparkling performance, at par to Vijay Sethupathi. Saif also does a good job so does Radhika Apte. But somehow the casting choices of Vedha’s brother as Rohit Saraf and her girlfriend played Yogita Bihani was not that great, again compared to the original. Firstly both didn’t look convincing that they come from a lower strata of the society and secondly their diction was all over the place. Other actors like Sharib Hashmi, Satyadeep Mishra,Govind Pandey and rest of the cast look and act well.

There is one big complaint to the makers the Alcoholia was a complete waste and it had no relevance to the overall narrative.

Direction wise Pushkar & Gayathri stick to the original narrative but the entire setup looked forced and there was nothing organic about narrative. The makers could have easily set the narrative in Mumbai and I think the flow would have looked better. Well I am no one to comment on the creative choices made by the makers.